Reflections on being an ELT volunteer 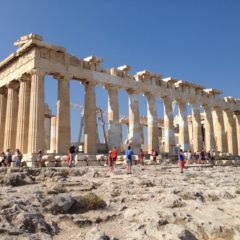 I just got home from Greece after a term away: I had three amazing weeks exploring and the rest teaching English as a volunteer in Athens. Other teachers have asked me about this, and I wanted to write about it.

However, there are dozens of little agencies helping migrants/displaced people across Europe – all very different, and working in different contexts. It’s hard to say, ‘If you’re thinking of volunteering, this is how it’ll be!’

Instead, here are a few reflections on what the experience offered me:

A reality check for my ‘other life’

If you ever feel cranky at work because the internet is down, or your data projector isn’t working properly, volunteering is a great reality check. I had a whiteboard and a corner of a large basement room, shared with several other classes, with adults and (lively) tweens in the same group. Hooray – English can be taught and learnt in any circumstances!

An update on what volunteering means these days

I did a long volunteer stint years ago, and discovered how different things are now. Of course you can still spend a year or two somewhere, but you can also spend two weeks – that was the minimum required by the (free) placement agency I went through, Indigo Volunteers. Volunteers pay their own way (with cheap rent in shared housing), sometimes doing this on a regular basis (I met quite a few people who’d volunteered in Calais). Of course you need to be independent in attitude too – there’s not going to be a lot of hand-holding.

Seeing English as a bridge

English was not exactly the most pressing need for many students I met, who hoped to go to other European or Scandinavian countries (but whose future was uncertain). So was it of value? Of course, having a place to go and something to fill the day (in a welcoming and air-conditioned community centre) was of value, but why invest time in English?

From my teaching life here in Australia, I think students have such an advantage if they’ve learned a roman-script, left-to-right language (like French) before, even if they haven’t learnt English. Just to start in ‘Beginner’ rather than ‘Literacy’ class is a step ahead. So I’m hopeful that even if those students I met in Athens ultimately need to learn German or Danish or French, their English will give them a boost. Plus English is, of course, a language you can use everywhere, and will be useful their whole lives. (Whatever your thoughts on English domination…)

A reminder of how privileged I am as an English speaker

As per the previous paragraph! Living in Greece didn’t really provide me with the linguistic experience of ‘being a newcomer’, as almost everyone I met spoke to me in English after hearing my few halting words of Greek. It’s so reassuring when you know that someone nearby will always speak English. How different it is for a speaker of Dari or Karen here in Perth…

I think the most frequent questions I was asked were not ‘What is your name?’ or ‘Where do you come from?’ but ‘Would you like a plastic bag?’ and ‘Do you have a shopper loyalty card?’

… and on what is empowering as a new language speaker

I discovered that it’s empowering to be the person who can help (rather than always being the person who needs help). I had such happy experiences of being able to point someone in the direction of the street they were looking for, or to the right Metro entrance (once I worked out what they wanted).

I cringe a bit when people say, ‘Oh, you’re so wonderful!’ – I was working in the community, not in a camp, with students who felt familiar, while exploring a fascinating city – I’d rather hear, ‘Oh, how wonderful!’, because it was. It was an adventure. (I do know that other volunteer gigs would be more confronting, and more demanding…)

A reassurance that even a short time is OK

That minimum of two weeks is not long. I initially wondered if it could be too short – and also worried about the issues raised by orphanage voluntourism, where children may go through endless attachment and separation as volunteers come and go.

However, I was working in a language program, not an orphanage, and without volunteers giving up a bit of holiday time, many programs in Greece (and I’m sure elsewhere) would not exist.

As I stayed longer, I realised that the programs keep running, even with different people, and that the students have learned that high teacher turnover is part of language learning. One wise 12-year-old summed it up well: ‘It’s hard, because we start to love the teachers and then they go home – but we know this!’

Finally, if you’re actually thinking of doing something like this and would like to hear more details (or a recommendation!), please get in touch. I’d love to chat…

2 responses to Reflections on being an ELT volunteer