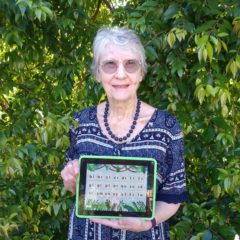 If you teach pre-literacy or early literacy ESOL learners – and have access to iPads – you may have used OzPhonics as another way to review simple sound-to-spelling patterns. I’ve used the apps with adult learners, who like them a lot. I like them too, because they’re systematic, don’t look too childish, and you can set the audio to an Aussie accent. So I was looking forward to finding out more…

Diane, how did you get interested in the area of phonics?

I was an infants’ teacher in Newcastle, but I’d always loved language, and learned other languages myself. One day I picked up The Language Instinct by Steven Pinker, and that book changed my life. I knew I had to leave teaching and go back to uni, to study linguistics and language acquisition. I even got in touch with Steven.

It was – I’d always had success with teaching reading, but now I had the theory behind it. I started up a small business to help children with reading, starting from sounds, then moving to how you might write those sounds down. That’s the principle that’s behind the Oz Phonics apps, too. I had such success, even with students who had learning difficulties.

How did the actual Oz Phonics apps come about?

I was chatting to my son about my work, and how I’d like to share it more widely. Quite out of the blue, a friend of his, Steve Cossey, said he’d be happy to be the business and technical side of the project. It was so fortunate, because although Steve doesn’t have a background in teaching or in reading, he has the business and technical acumen, and he understood my vision.

Well, for example, I wanted everything to be systematic. I also wanted a simple design for the apps, without flashing lights and applause every time a student gets a word correct…I think those things are distracting.

And that has helped make the apps suitable for adults too…

Exactly. I was initially working with English-speaking children, but the apps have proven suitable for ESL as well, and for adults.

“Drag the missing sound into the word: leg.”

What did Steve do that you couldn’t have?

He made the whole thing happen! He brought in really excellent designers and professional actors for the sound, and provided all the financial backing for this, so that made a huge difference.

It’s fun with the different accents – one of my students turned on the NZ accent, and I thought I was hearing things!

Yes, we’ve got Australian, NZ and US so far – I believe Steve is investigating a British version.

I like the inclusion of the (free-to-download) worksheets, too.

Yes, I think that there’s now research evidence that actual handwriting helps you learn, in a way that clicking and dragging doesn’t. I also insist on parent involvement in my tutoring, and of course it’s the same in a class; the apps are used in many schools by groups of students, but with teacher support..

So, Diane, how have the apps been received?

Not everyone is convinced, of course – I know some teachers who are still wedded to sight words only.

Well, I think so. Of course there are words that students just have to remember, but I believe that it gives them confidence to have that sound foundation, the phonemic awareness skills.

Yes, one issue for me is the challenge learners face as they move from the ‘logical’ CVCC and CCVC words, and on to long vowel sounds.

Yes, you’ll have noticed that from the introductory app through numbers 1 to 4, presentation of new sounds is systematic, with sound/letter correspondence being regular.

However, once we get into long vowel spelling, there are many options, and students will definitely find remembering them all quite a challenge. App 5 contains several interesting activities, which provide practice.

Yay, practice! I think that’s vital! What’s the most important thing for you in your teaching, as well as practice?

Teaching schwa. I like show consonants in black and vowels in red, but the schwa in green. I get students to listen and copy my intonation, then I let them look at the words and work out what’s going on.

Oz Phonics 5 is already out, and Steve is working on 6. You’ll notice that the apps are getting less pictorial and more text based, of course, as the students themselves are getting older.

NOTE: I’ve now got Oz Phonics 5 (Steve gave me a free access code – full disclosure here!) and I like the very slow, systematic practice on long vowel spellings (A, E and I) and sentence reading that can be sounded out. And yes, of course, there are some words that ELT learners won’t know yet…

Big thanks, Diane, for talking to me!

I also asked Steve Cossey if he wanted to add anything… Steve, how many more apps?

As Diane said, I’m currently finishing off Oz Phonics 6 and I have roughly mapped out Oz Phonics 7. That should be the last app in the series.

What’s your take on how you got involved?

My original interest was sparked on two fronts.

I was looking for an app project to take on, to learn the app development process. I had worked for about 12 years as an insurance/banking systems programmer, mainly in Europe – back end calculation/billing type stuff. Then I retired from that, and was wanting something to ‘keep my eye in’, so to speak.

As well as that, my eldest child was just starting to learn to read and so Diane’s approach was also very helpful for my own children.

How long did the app development take?

I can’t really remember how long the first one took – maybe 9 months. A lot of that was learning to program the iPad (in a new language) and doing things like animating. It was a very steep learning curve, but the funny thing is that I bought the ‘iPad Programming for Dummies’ book from my local store, and that really got me into it.

Ha! I wish we could all create new careers like that! And what’s next for you, Steve, after Oz Phonics 7 comes out?

Next on the agenda? Well, I’ve had a few requests for more accents. Whether or not I incorporate those into the existing apps, or produce some phonics reference type apps for different countries, I’m not sure yet.

I have some more game/exercise ideas for the existing apps, too.

I’ve also been looking at Adaptive Learning and AI (Artificial Intelligence) – can these concepts be implemented in the Oz Phonics series in a simple way that helps the learning?

Wow. Thanks, Steve. I look forward to seeing what you come up with.

You can find out more about OzPhonics at ozphonics.com.  And just a tip – if you’re using the apps, remember to scroll down to get the full range of menu items!!