ESL Book Clubs – how can they work?

Posted by Clare Harris / Blog / 2 Comments on ESL Book Clubs – how can they work? 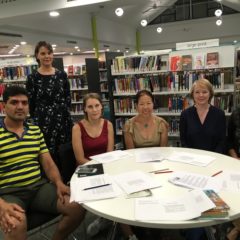 I love the idea of ‘Book Club’ for English language learners, but I know that joining a mainstream book club is a long way off for many new arrivals. So I was excited to hear that Rosalie Foss had written a whole dissertation on the concept of EAL/D book clubs in public libraries, and run a pilot program at the Town of Victoria Park Library, not far from where I work. I asked Rosalie to tell me more about the first ‘ESL Reading Circle’ (as it was called).

Rosalie, what got you interested in the Book Club concept?

Until recently, we had an English Conversation Class at Victoria Park, and back in 2016, I gave them a tour of the library, and then asked if there was anything else that we could offer. They said they’d like a book club, but slightly different from the traditional model. The pace would need to be slower and a bit more support would be required.

At the same time, I needed to pick my dissertation topic, and this was an idea that had the potential to have a practical outcome. Then, mid-2017, when I was in the middle of my research, the State Library of WA released a new Literacy Strategy and what I was doing aligned with it very well.

So this idea came from the language learners themselves?

Yes! What’s really clear is that they want to be part of the community – that they see libraries running other book clubs and they recognise it as an adult, mainstream thing to do – but just a little out of their reach.

How was the ESL Reading Circle different from a standard book club – and from the Conversation Class?

We didn’t ‘read at home and discuss in the group’ as a mainstream book club would do – we actually read together in the session, before our discussion. I initially thought that the participants would like to hear me read, but no! They wanted to read and have their pronunciation corrected, because they don’t have much opportunity for this in the rest of their life (and I wouldn’t do it in the middle of a conversation group). I think the ‘reading aloud’ component gives the program its niche, and it’s what the participants asked for.

How about the social aspect of book clubs?

Just as in ‘traditional’ book clubs, the social aspect is as important as the book. Reading can also take the pressure off, because there are still benefits to be gained, even if participants are too self-conscious to want to talk (in English) in front of the group. And then they find that, actually, their English is good enough that they can join the conversation and the discussion – the book has worked as a catalyst.

What kind of books worked best, for different levels?

At the very first session, I put a variety of texts on the table, both original and adapted, and asked participants to look and choose what we should use. The vote was unanimous! They chose ‘My Job is the Best’, the free book on your website, and then other books of yours from the ESL collection, which have a free chapter to download from the website. We knew they’d be easy, but they were a great way to introduce the program to participants, and now I feel we can move on to something a little more challenging.

That’s so nice to hear! Thanks. Do you think it’s better reading a novel, or shorter texts?

I wanted to be able to use a single book per 8-week term, and even wrote my own book, about my grandparents’ childhood in WA, so I could have a free resource to test this approach, and allow participants to have copies they could annotate.

However, having tried this, I no longer feel that it’s a priority. In fact, a disadvantage to having one book for the term is that it discourages new participants joining at any time. What the participants have shown great interest in is Australian culture and history.

Through fiction or non-fiction?

The idea of ‘fiction based on the truth’, as in the book I wrote, was a little complex for some of the participants. Now I’ve started using biographies of Australians, and linking what we read to some of the knowledge they will need to know for the citizenship test. I really hope that we can work towards reading fiction again. I do feel there is value in sharing a story together. Fiction can expand your language but also your cultural understandings.

How was the feedback?

Positive feedback from the pilot program evaluation included that the program improved reading skills, English comprehension, English pronunciation and increased vocabulary. I was thrilled that participants wanted the program to continue, and that Victoria Park Library was supportive.

What about the benefits to the library? I guess the Book Club encourages borrowing?

Of course, as librarians, we know where everything is in the library, so I can dash off and grab a book that supports someone’s interests – and then they can borrow it. I encourage them to bring the book in after they’ve borrowed it and talk about it. Our participants may not be used to browsing for a book, so I can support them in that too.

That’s great! Who else has been doing this kind of thing?

Libraries overseas and interstate have similar programs. Canada appears to have a really strong support system for their CaLD community. The general idea isn’t new, but what was new as far as my dissertation was concerned is the extension of the program to be state-wide, supported by the State Library and delivered at public libraries.

So that’s the vision. How far have you got with this?

I presented the idea to SLWA (that’s the State Library of Western Australia) and they suggested that I run the pilot program, which Victoria Park supported. I’ve learnt that people are very supportive, but to get the program running as I envisioned it, it will be a series of small steps. Funding is going to be imperative at this point.

Is there a model for how a state-wide program could work?

The LETS (Learning English through Storytime) program is really well organised and run – I’d love to see something like that happening. They have tubs of books which can be ordered and sent around the state. That’s why I’m really hoping the State Library will consider taking this on and making it a state-wide project, like Better Beginnings (which of course gets wonderful funding from Rio Tinto).

Good luck! You had another idea of a book for every learner exiting AMEP… is that a dream or a possibility?

If the program can get funding, that is my top priority. My model is the Better Beginnings program where early literacy is promoted to new mothers. In WA, Child Health Nurses give every baby a Better Beginnings bag, including a book and information about Rhymetime sessions at their local library.

I’d like to see every AMEP graduate receive a book and an invitation to Reading Circle sessions at their public library. It would be great to have a small book of short Australian stories (written at the appropriate level) that would then be the first book read together by the Reading Circle group.

What a great concept. How about training?

Again, based on the Better Beginnings model, if SLWA were able to provide training, best practices and resources, librarians could facilitate the program.  That would be the ideal situation, in my opinion. I’ve already had people ask if they can volunteer to help with running the program at Victoria Park, which is great, but I do think there needs to be a library staff member involved.

What qualities do you need to run a Reading Circle?

You have to be comfortable with the unexpected, because you don’t know which way the discussion will turn – and willing to set some boundaries, so you don’t get bogged down on specific language queries.

Promotion needs to be simple and visual – we decided on this rather than on translated flyers. We had a simple flyer and asked people to SMS the word YES to us if they wanted to attend – there was no booking system.

I had no idea before I started the program how much fun it would be, and how rewarding. It just feels like I go to book club every week with a fantastic group of people who all laugh and chat together. It’s great to see people from different cultures laughing at the same jokes together. It becomes a community. I love it – it’s so much fun. It’s a lovely atmosphere – it feels like a group of friends.

Thanks so much, Rosalie, and good luck for the future!

A final note: If you’re looking for ‘My Job is the Best’ just click on the link.

2 responses to ESL Book Clubs – how can they work?