Sing with me stories from Urban Lyrebirds

Have you seen the new reading books from Urban Lyrebirds, by Carmel Davies and Sharon Duff?  These are the Sing with me stories, a series of 10 reading books, matched to the Sing with me! 1 songs and workbooks. They’re available in paperback and pdf versions, with audio online. Each story is at two levels in the one book, (that’s beginner and post-beginner)… but they’re not just stories: they have some fantastically useful features. I realise it’s been over two years since I talked to Carmel about their May Street Readers, so I was happy to have the chance to chat with Sharon last week about the new books…

Sharon, I have so many questions. What made you decide to create the readers?

We wanted to offer something to reinforce the language patterns, Settlement themes, and vocabulary of the Sing with Me! books. It’s the idea of presenting one idea in a whole lot of different ways, so students get the opportunity to practise the same language in a variety of contexts.  That way the students really understand the skills involved and the concept.

Does that describe your teaching philosophy?

Very much so! That longstanding idea of exploiting texts, making sure students feel confident with the language before you move on, rather than filling up the lesson with ten new things. That’s what these readers do!

How would you describe the readers to us?

As well as the two levels in one reader, and two audio speeds, we’ve also used features from the Sing with Me! books like marking syllable and sentence stress, just very simply, with bold formatting and underlining. So as students read aloud, they’re reminded where the stress goes, like this for example: Suddenly, he runs away.

The importance of pronunciation?

Yes, exactly. I’ve noticed how in classes, pronunciation can become something of an add-on. I’d love to see it integrated into every lesson.  The focus on syllable and sentence stress in these readers helps with awareness, and forces students to pause without even realising it. Then once students understand how to improve their reading aloud and speaking skills, you can use this system as a model in other contexts.

And the culturally diverse aspect?

If you look at the 10 covers, you’ll see that each story features a character from a different cultural background, which celebrates our cultural diversity.  The book cover design incorporates textile patterns from a particular culture. We wanted vibrant colours with interesting designs. We had a very creative book and cover designer, Veronica Dixon, who Carmel actually met at a design market, and we love the way the covers look.

They are stunning! But the language is also inclusive, isn’t it?

Yes, each story has a word or two from the main character’s first language, just to normalise other languages, so everyone in class gets to learn a few words in another language, whether it’s Arabic, Chinese, Sudanese or a number of other community languages.   For example, in the story called It’s nice to see you, Hiba uses the word Habibi (which means darling in Arabic).

It’s explained for learners, so no-one feels puzzled, but it’s presenting first languages as a natural part of life.  Communicating in two or more languages is common place for many of our students.  Having at least some understanding of each other’s language and culture benefits us all.

How about the follow-up exercises?

Nice. What made you decide on the two levels in one book?

That’s a funny story – it arose out of our writing system. Carmel and I had agreed that we’d write five stories each, then meet up, share and edit together. However, when we met up to share our stories, we discovered that my stories were much longer. We realised that this would be a great opportunity for both of us to rewrite, so that all the stories were available at two levels, for disparate level classes. It doubled the work, but it was so worth it!

Where did the inspiration come from?

From the Sing with me! books, our own lives and the lives of our learners. For example, in It’s nice to see you, Hiba takes her son Fareed to the market, and he climbs out of his stroller and runs off! I have twins, and once, when they were toddlers, the same thing happened to me … Universal themes!

How long did the whole project take?

Two years. But they were two Covid years, so it was a good project to have during that challenging time.

I see that you also did the illustrations… I’m impressed!

Yes, these are the first of our books that I’ve illustrated. My background is in teaching art and craft, so that love of art has always been there.  When Covid came along, I thought this would be a nice opportunity to have a go, so I got out my iPad, and started playing with a drawing program…it took a while.

They are lovely! How do you envisage teachers using the books?

We’d been asked for e-books by schools who wanted to go green. With the pdf version, a teacher can project the story onto a screen, and the class can read together.  Whether they use the e-book or the hard copy, I’d expect that all learners would start with the story at the first level, then some learners in the group would move on to the second level. The exercises review different language features, and the stories are written like a drama script, so students can also use them for roleplay in the classroom, moving reading from something seated to something physically active.

I love that idea of getting learners moving…

Yes, Carmel has a drama background so she has always enjoyed using drama as an effective teaching tool in the EAL classroom.

How has the feedback been?

We’ve had extremely positive feedback, but the books are very new. Now it’s time to promote them…

So do you have time to work on anything new?

We have a bag full of ideas, of things in the pipeline. We’ve been writing for nearly 10 years now. It’s a labour of love – as you know. One thing we do want to finish is the book in the Passages to English series that our beautiful colleague, writer Maggie Power, planned before she passed away. She is so missed – and those Passages books are just fantastic resources.

Can we catch up with you anywhere?

Carmel will be doing a workshop at the ACTA Conference in Brisbane at the end of this month, so look out for her there.

We’ll also be offering workshops on using pronunciation, song, and dramatic performance. You can enquire about them or find more information on our website.

Speaking of websites, I see the Urban Lyrebirds site has had a big upgrade…

I love it! Well, thanks for chatting, Sharon. I can’t wait to read more of the stories! 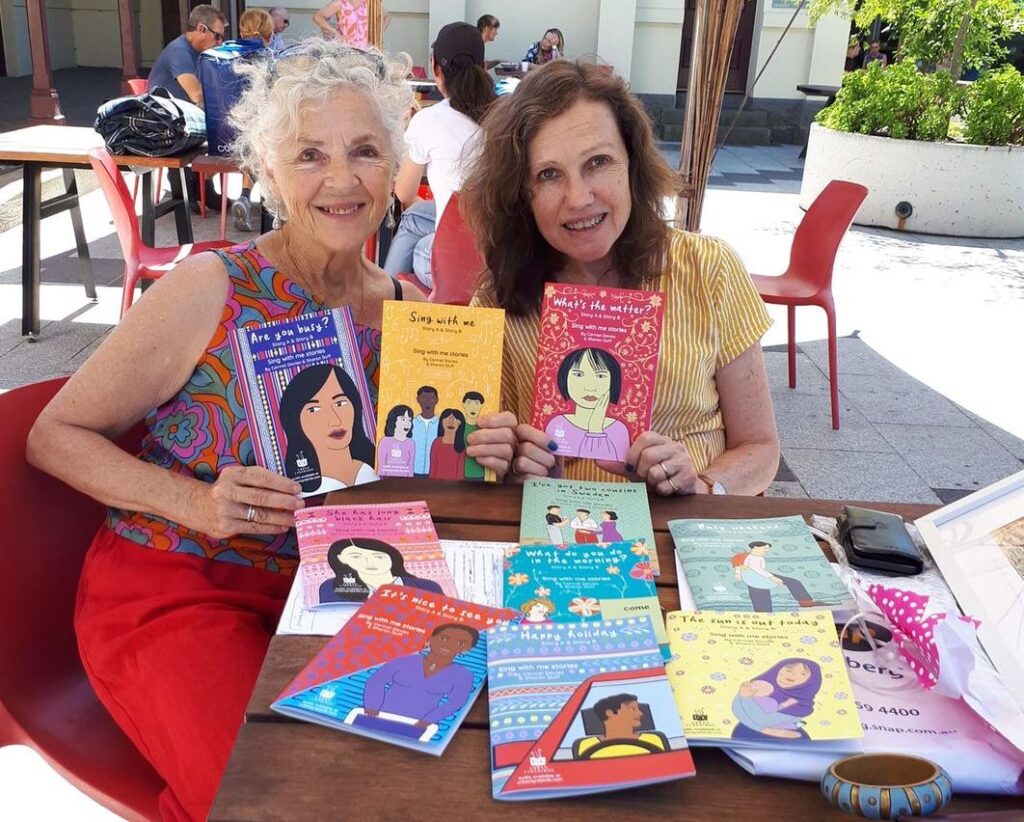