The Sea, The Sea! A new Australian ESOL resource

Posted by Clare Harris / Australian ESL materials / Comments Off on The Sea, The Sea! A new Australian ESOL resource 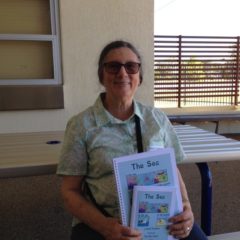 In this post, I talk to Hazel Davidson about The Sea, in the sea, on the sea, at the seaside. This is the new book from Sugarbag on Damper, written by Hazel and Dorothy Court (with input from many, many people).

I met up with Hazel in Mackay, at the QATESOL/QCAL regional mini-conference (which she was instrumental in setting up!), where I got a copy of the reading book and workbook.

I wished I’d had the book earlier, as when I told my students here in Perth about my trip, they were amazed that I wasn’t sure if I’d be swimming. It was going to be warm, right? I was going to be in Cairns before the conference… so why not swim?

We had a look at pictures of crocodiles and jellyfish, and I told them that I’d have to check it out – that I wasn’t 100% sure about swimming at this time of year… and they were intrigued. They knew about sharks, but that was all.

So hooray for this book, which looks at the positive aspects of our beach culture as well as ‘things to be aware of’.

Hazel, I saw on your website that you first had the idea for ‘The Sea’ 10 years ago. What motivated you?

A lot of students go to the beach, but they don’t know what the dangers are, or they avoid the beach altogether because they’re intimidated. It’s especially difficult for those who come from places far from the sea.

We wanted to encourage people to go to the beach, to enjoy the beach, but have some preparation so that they can avoid the dangers. They need to know how to behave and what to do. We also wanted people to learn about some of the many fascinating animals and birds that live in, on and beside the sea.

Yes, as with our other readers, the same content is told at three levels of English, so it can be used in classes with mixed reading levels or as a method of enticing students to attempt more challenging texts. As in our last few readers, we’ve used an unusual font for the beginner level – Dyslexie a. You can see it’s very clear, with letter shape designed to reduce confusion, extra space between letters and words. It was designed by a young Dutch graphic designer who himself is dyslexic.

Plus you cover a whole host of topics – and there’s more in the Workbook?

That’s right. We couldn’t put everything in the reading book. For example, we included basic first aid for the most poisonous bites and stings, but we couldn’t cover CPR in the space we had available in the readers, so that’s in the notes for teachers. We suggest that, if possible, teachers should call on St John Ambulance to teach CPR to their students. We also point out that defibrillators are commonly available in Australia and some of their students may be able to learn to use them.

It’s the same with skin cancer – it’s too complicated to put into the reader, but we consulted Qld Cancer Council for advice to include in the Workbook. If we said, ‘Always use sunscreen or keep out of the sun’, then that could lead to Vitamin D deficiency for some class members. So it’s really up to the teacher to tailor instruction to the class and to the context.

Well, this is a language resource where the subject matter is a vehicle for teaching English language and literacy – it’s not only for information. The activities are at the same three levels as the reading material.

Hazel, what are your own ‘beach safety’ experiences?

I lived and brought up a young family on Groote Eylandt in the 1970s, where we had to look out for sharks, sea snakes, crocodiles and sea wasps. In those days we were more worried about the bigger box jellyfish, but the local indigenous people told us, ‘No, the little ones are the worst,’ – the Irukandji. Both species are now moving down the coast, with warming waters – they’ve got as far as Fraser Island in Qld and possibly as far as Port Hedland in WA. (The irukandji are certainly in Broome: see this ABC report.)

Eeek! That still might sound ‘far away’ to my students in Perth, but then they might go to work in the northwest.

Exactly – and I imagine that teachers will focus largely on local conditions. However, you have to allow for students going on holidays to other parts of Australia.

It all sounds scary to a newcomer, but the point of your book is the pleasure of the beach too…

Absolutely! We wanted to help learners stay safe, and enjoy the beach, and to introduce interesting creatures, like whales, dolphins, penguins and turtles – and we have a plug for the Great Barrier Reef in Qld and Ningaloo in WA.

Beach culture and safety is an important settlement topic, but how do you think it fits with the Pre-Employment focus of many classes?

Look, if you live in Australia, then beach safety is a huge health and safety issue, essential for settlement.

And if you are focusing on employment, then you might keep in mind that:

Good point. Finally, Hazel, this book is for adult learners, but could it work for school classes too?

This has happened with our other books – they’ve all been used in schools at various age levels. Schools use the books with quite young children who are just learning to read and in secondary schools for EAL/D learners, as well as with Australian-born students who are struggling with basic literacy. Because the books are actually written with adults in mind, there is nothing childish in them, which means they are not off-putting to adolescents.

On the other hand, there is nothing unsuitable for young children either. My own grandson has been reading them since he was in Grade 1, when his favourite was Gold! (a history of gold mining in Australia). He started with the easiest level text and then tried each of the harder levels. Now he is in Grade 5 and merely reads the hardest level texts, but he still finds the subject matter of the books interesting.

Fantastic! Thanks, Hazel. You’ve inspired me to do a post on ‘at the beach’ resources too!

Good. This knowledge needs to be shared!