CamTESOL – and how we think about local teachers of English 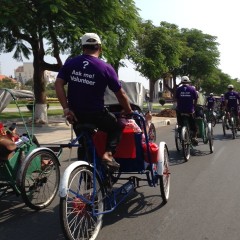 I turned up at the CamTESOL 2016 conference with my head buzzing with impressions from Angkor Wat, from the Landmine Museum, from a dusty bus trip to Phnom Penh, from a cyclo ride around the city. Still, I was relaxed; somehow I’d got the idea (perhaps based on the reminder not to wear a suit or high heels) that the conference was going to be reassuringly small and local.

How utterly wrong I was. CamTESOL was reassuringly friendly, but it was also huge: 1600 of us, including 1000 local Cambodian teachers, and a host of volunteers. It was fabulous and hot and intense and busy, with the only downside that I had to miss so many parallel sessions that sounded fascinating …

A keynote with a difference

Something that struck me was a presentation by one of the keynote speakers. She spoke particularly clearly, in a ‘slow and thoughtful’ way (not so slowly that it sounded odd to me, but perhaps as I would speak to an intermediate to advanced class, when introducing concepts). She was clearly keeping in mind the fact that many of the teachers there had not grown up speaking English, but had had to learn it and might still be coming to terms with the endless varieties, accents and modes of expression that make up English.

There are two things that this brought up for me:

The first is whether we refer to those local teachers, teachers we may admire greatly, using a ‘deficiency’ term, of ‘non-native speaker’. That’s been on my mind since reading an article by Laura Soracco (@LauraSoracco on Twitter, blogs at Tesol Thoughts); on Native and Non-Native Language Speaker” Labels: A Flawed Dichotomy.

It makes me think of how not so long ago, my colleagues and I said that we taught ‘NESB’ learners (Non English Speaking Background). Yes, it was useful to distinguish from ‘ESB’ adult literacy learners, but still, that negative ‘non’…

What’s the alternative to non-native, however? Does ‘multilingual teacher’ give a better picture? I don’t have answers, but I’m interested in the discussion.

International English and its demands

The second issue that keynote raised for me is how we make ourselves understood in the world of International English, and again I found this article through Twitter, which I’m increasingly enthusiastic about (thanks @hughdellar for this one). Why native English speakers fail to be understood in English – and lose out in global business  (from The Conversation, by Spencer Hazel).

As ‘fluent speakers’ (if we prefer that term to ‘native speakers’) do we need to do some adapting ourselves, to fit into the world of international English? This keynote presenter certainly did this, but does everyone?

Of course we may say that as teachers, we’re aware of our own language, but as I look back over this post, I see my trademark long sentences. Plus it’s easy for a teacher to get carried away, with little asides and jokes. I experienced this lately as a language learner and felt so annoyed and frustrated.

If even as a teacher, I can be less than clear, what about non-teachers and non-linguists from other disciplines? Is there some training that needs to be done for those ‘native speakers’, to help them cope on an international stage? Again, no answers, but lots to think about…